Synopsis of the series
This is the story of a world whose territories and own frontiers were built by the slave trade. A world where violence, subjugation and profit imposed their routes.

The history of slavery did not begin in the cotton fields. It is a much older tragedy, that has been going on since the dawn of humanity.
From the VIIth century on, and for over 1,200 years, Africa was the epicentre of a gigantic traffic of human beings traversing the entire globe. Nubian, Fulani, Mandinka, Songhai, Susu, Akan, Yoruba, Igbo, Kongo, Yao, Somali… Over 20 million Africans were deported, sold and enslaved. This criminal system thrived, laying the foundations of empires around the world. Its scale was such that for a long time, it has been impossible to relate it comprehensively. And yet, it raises a fundamental question: how did Africa end up at the heart of the slavery routes?

In 476 AD, Rome fell under the pressure of barbarian invasions. On the ruins of the Roman Empire, the Arabs founded an immense empire that stretched from the banks of the Indus to the South of the Sahara. Between Africa and the Middle East, a huge slave trade network was forged, that would last for centuries.
At the heart of this continental network, two major merchant cities stood out. In the North, at the crossroads of the Arabian Peninsula and Africa, Cairo, the most important Muslim city and the main commercial hub of Africa. In the South, Timbuktu, the stronghold of the great West African empires, and point of departure of the trans-Saharan caravans.
In this epic and documented story, the first episode of Slavery Routes tells 700 years of history and reveals how the sub-Saharan populations have become, over centuries, the main “raw material” of the greatest deportation in history.

At the end of the Middle Ages, Europe opened up to the world and discovered that it was at the margins of the main area of wealth generation on the planet: Africa.
The Portuguese Conquistadores were the first to set out to conquer Africa. They went to get gold and came back with hundreds of thousands of captives to sell in Europe.
Between the African coasts, Brazil and their trading posts, the Portuguese set up the first colonies entirely populated by slaves. Off the coast of Gabon, the island of São Tomé became the testing ground for the most profitable exploitation system ever to exist: the sugar plantation…

XVIIth century. The Atlantic has become the battlefield of the sugar war. French, English, Dutch and Spaniards fought for the Caribbean to cultivate sugar cane. To satisfy their dreams of fortune, the European Kingdoms opened new slavery routes between Africa and the islands of the New World. With the complicity of banks and insurance companies, they industrialized their methods and brought the number of deportations to unprecedented levels. Trapped, nearly 7 million African were caught up in a gigantic hurricane of violence.

In London, Paris and Washington, the abolitionist movement was gathering momentum. After the slave rebellion in Santo Domingo, and facing the public opinion’s growing outrage, the major European powers abolished the trans-Atlantic trade in 1807.
Yet Europe, in the midst of the industrial revolution, could not do without the slave workforce. To satisfy its needs in raw materials, it pushed further the frontiers of slavery and turned a blind eye on the new forms of human exploitation in Brazil, the United States and Africa.
At a time when legal trade was finally prohibited, the deportation of African captives would explode, and become more important than ever. Within 50 years, nearly 2.5 million were deported.

When shootings specifically target the black American community, like in Charleston; when the police shoot down an unarmed black man in Ferguson; when nearly 2/3rd of the poor in Brazil are blacks; when the “statues of shame” still adorn numerous French cities… It is time to question the roots of evil and to understand why racism and anti-black discrimination remain so persistent.
In June 2015, Barack Obama stated that
“The legacy of slavery […] casts a long shadow, and that’s still part of our DNA that’s passed on. […] It’s not just a matter of overt discrimination. […] societies don’t overnight completely erase everything that happened 200 to 300 years prior.”
Too often, we reduce black slaves to the status of mere victims and, conversely, consider the responsibility of Western societies only in terms of guilt and moral fault. Beyond this binary frame, a third way of analyzing this issue is possible: it consists in describing slavery as a process, a universal shockwave whose tremors we still feel some 200 years after the official abolition of the trade.
In order to comprehend this massive phenomenon – in its duration, its extent, its lasting consequences – it seemed necessary for us to adopt a systemic approach. In other words, to understand the question of slavery from its territories and the commercial channels that were drawn by the different trades. To question the geography of slavery is to measure its internal dynamics, with its areas of exchange and breaking points.
Slavery Routes is a collective work. The meeting of three visions, three personal stories where Africa, the Caribbean and Europe converge.
This multiplicity of perspectives enabled us to comprehend slavery as a whole, by going beyond stereotypes and preconceptions about the culture of the other.
With these four films, we wanted to fight against the collective oblivion that feeds ignorance, prejudice, resentment and hatred.

Revealing the truth on this common heritage, and recalling that slavery is not a marginal historical phenomenon but a central issue in the history of the world is a means by which we can protect ourselves from the crimes of the past. And progress in the struggle against all types of inequalities and discriminations. 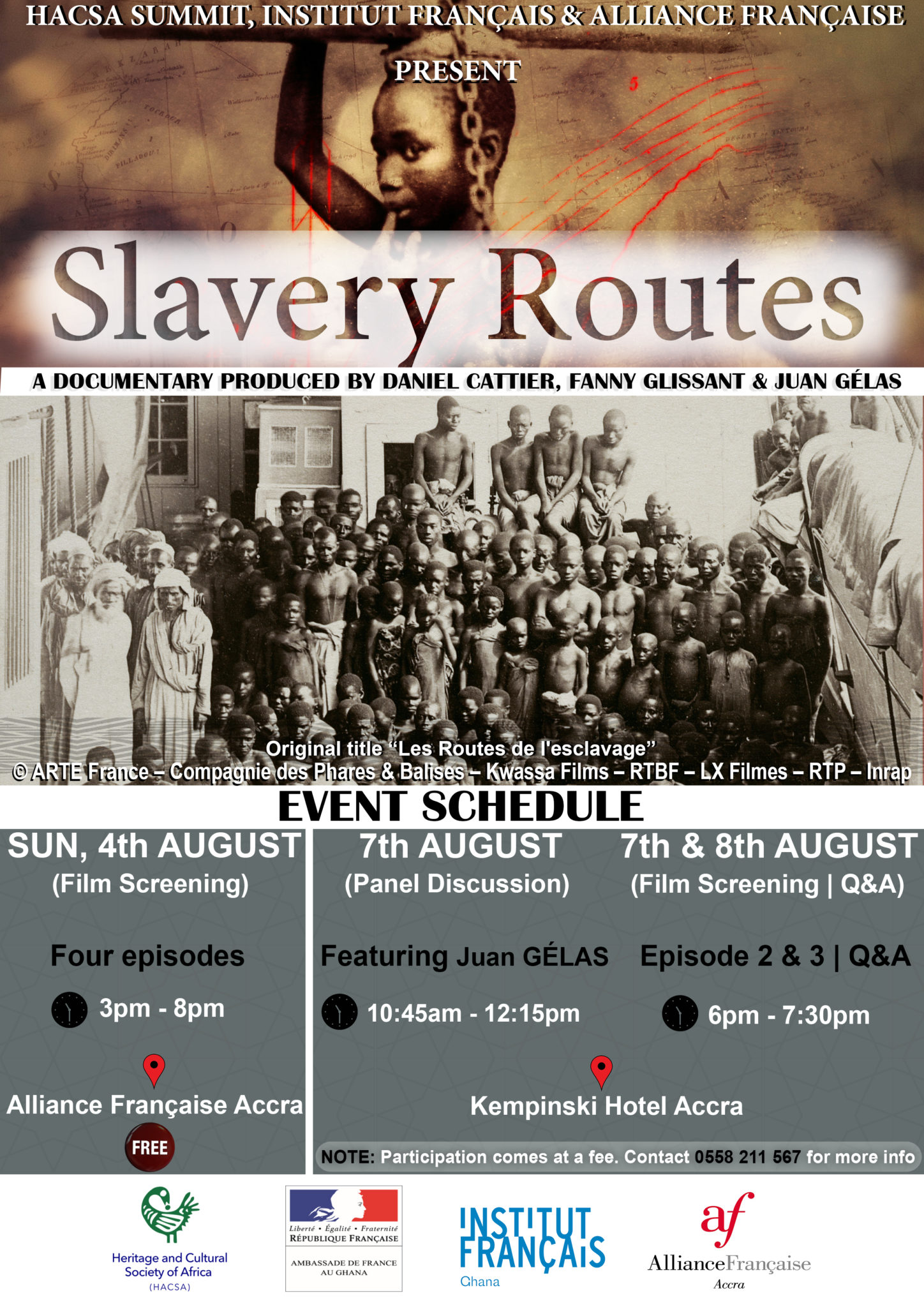